I usually hate “old sayings.” Normally they are just wound up in old ideals and misconceptions and “boys will be boys” fell into that category. Last night, though, when I was watching my son and his two friends play, it looked so similar to what I did as a child, I found myself embracing that old adage. So how about we rewind for a moment.

When Asher found out that Hasbro was being cool enough to send us a few Yo-Kai Watches he was pumped.  He had no problem choosing which three of his buddies he wanted to come over to play with them with him. His main problem was that there were about three weeks (an eternity in 4 year old land) between him inviting his friends over and the day they would be coming.

That was when I first began to see my childhood through his eyes.  My parents let me have a sleep over every year for my birthday and I can remember the days totally oozing by while we all anticipated the big night. My parents got sick of me asking how many days until everyone got to come over and I am sure I was insufferable the day before it took place.  I spent the hours before my friends were going to come over practically climbing the walls.

Asher was exactly like that.  To be honest, he spent most of the hours before his little party in trouble!

As soon as Luke and Peyton got here, I felt like I was once again peering through the looking glass back at myself.  What is the first thing they began to do, of course? Wrestle. And wrestle. And wrestle. It is probably a miracle that they were alive and unbroken once the pizza got here! 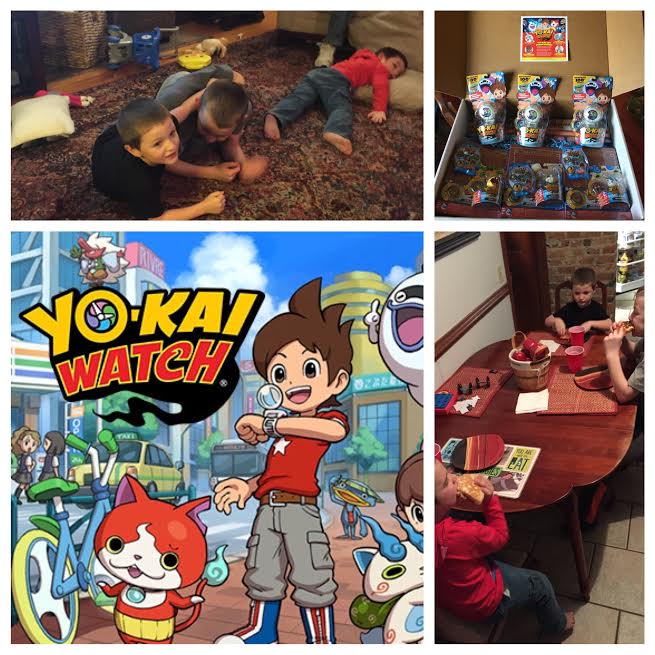 Watching them I was: 1) Envious of the ease of their youth.  Not just the boundless energy that they had, but the ease that they had with one another.  No need for small talk or explanations or niceties, they just simply “were.” 2) A little homesick for all those boys I used to rumble around with.  Even though some are connected to me by the magic of facebook, more have been lost to the shifting of time. But the times we had together were simple and joyful and I saw that in my son’s eyes.

That is when I thought, you know, it is true, boys will be boys. I buy into it.  Fully.  Not as an excuse for any behavior but just as a truth.

After pizza it was time for the main event, to continue the wresting analogy. We popped the Yo-Kai DVD into the player and I let the boys open their watches.

To condense a hectic insanity filled time period down to a couple of words: They freaking loved this stuff. 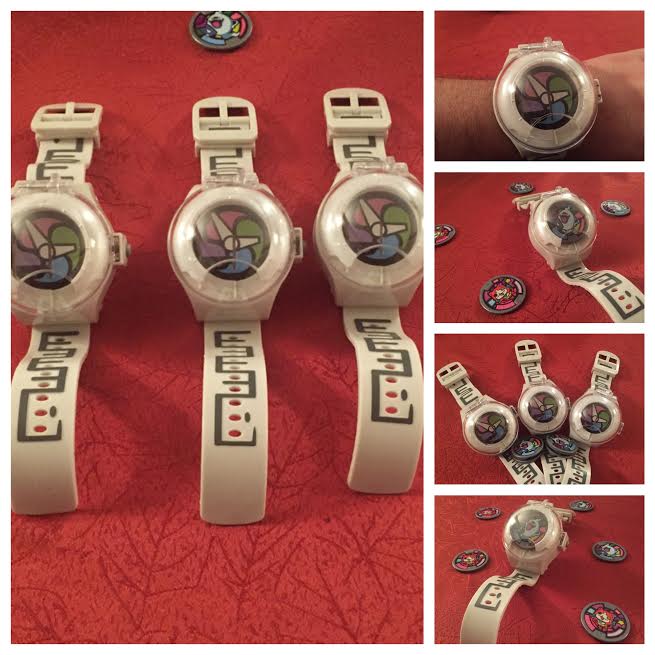 The watches make cool noises. There are a million character disks to put in them.  Some sing little songs, some say funny little phrases, some look like a little man with a (literal) butt head who has a super power of farting.  They rolled on the floor laughing and then began to emulate his power until all the adults in the room were laughing as hard as they were.

In High School, a friend’s mother once asked a group of guys and I when bodily functions wouldn’t be funny anymore.  His father chimed in, martini in hand, and said “It must be after 60!” Again, a piece of my past proved true!

As the Yo-Kai excitement began to die down, the wrestling picked back up.  Except now they have gigantic watches on their hands while they executed their elbow drops and pile drivers!

One by one the boys headed home.  Asher was asleep moments after his head hit the pillow.  I felt so thankful that his life was so simple, and easy, and pure.  So grateful that boys will be boys, no matter if it is 1985 or 2016.

Take a moment to check out this video!

Since that is so cool, I feel positive you want to learn more!

And see some free episodes HERE!

Disclaimer: I was provided these toys for review and compensated for this blog and other social media postings.  Despite this, the opinions (and emotions) are all my own and true to life.

Man oh man.  I am strong willed and rediculously determined.  I always have been.  My Mom literally had a book called The Strong Willed Child that she often turned to when I was a little boy.

Asher came out of the womb mellow.  Of course he has that never ending four year old energy, but he is not the total tornado that Harper is.  I have heard that middle children are often over looked but I know in our family that won’t be an issue!

I think Harper and I are so close because we have so much in common at our cores.  Yes, she is only two, but if you were in the room with her for one second you would know that she is my mini me.

She has my stink eye. My suspicious nature.  My grumpiness.

But along with all of those “negatives” she has the ability to absolutely take over the world if that is what she wants to do.  She will never let anything stop her or get in her way.

That is why I encourage her spirit.  She is hard to deal with sometimes, like I am, but I know that her spunk is going to serve her so well when she is a grown up.  I don’t want to control her, I just want to help focus her.

She has me wrapped around her finger.  She is my baby.  My little girl.

I hope you will join me at http://www.instgram.com/mamalode and follow my day!

Mamalode has been so supportive of this Daddy-O, so let’s bring some love their way! 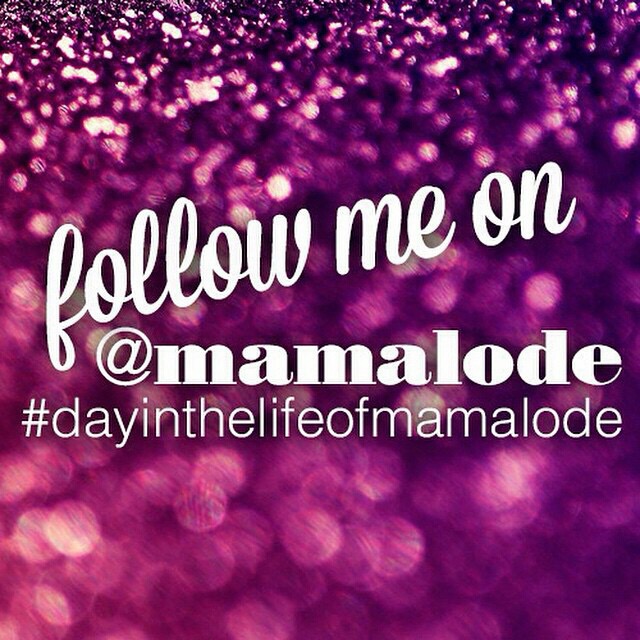