This is part one of The Pappy’s series about breastfeeding.  This is an important topic that is emotional for my family.  I, of course, talked to my wife before sharing our story, but we know we can help others.  If you have something you would like to share with my readers about breastfeeding, I encourage you to send me a message at thepurposefulpappy@gmail.com.

As my wife and I prepared for the birth of our first child we didn’t talk a whole lot about breastfeeding beyond the fact that she planned on doing it.  Although I made it a point to educate myself as much about birth and what she would go through as I could, I didn’t think too much about breastfeeding.  I took for granted that it would be easy for her.  I will admit something that in retrospect seems dumb, but I thought because she had big breasts it would be easy for her.  I guess in my mind her cup size indicated that she would have tons of milk which would in turn mean that Asher would be able to drink to his hearts content.

Our birth experience was long and emotional but beautiful.  We had a Doula who held our hands from start to finish and my wife was a tiger!  In the moments after Asher was born I think I forgot that my wife had any vulnerabilities because I had just seen her thrive under what were unimaginably painful circumstances.  I was in awe of her and I knew that she could do ANYTHING, so I never thought twice about the moments soon after birth when she would go to nurse our son. 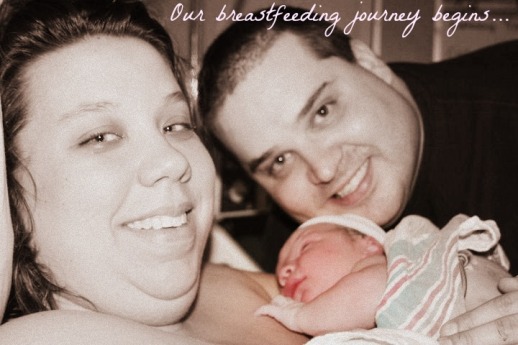 We cleared the room and with our Doula at our side she placed our son to her breast.  It was a beautiful moment of bonding between the two of them.  Asher, though, didn’t latch.  We didn’t worry though, and knew we would try later.

We asked every nurse, every doctor, our Doula, and lactation consultants.  Asher never seemed to be able to latch.

She pumped in the hospital and on the way home we stopped and rented a hospital grade pump from a lady referred to as the Nipple Nazi.  We were afraid of her fervent commitment to breastfeeding at the time, but in a week or two we would be so very comforted by her encouragement.

Mecalah pumped day and night it seemed, all the while working with our son to try to latch. I spent a lot of time laying next to her on the bed holding our small son while she filled little bags full of milk.  I felt kind of useless during this time because I wanted so bad to be able to help her, but aside from breaking down the breast pump and cleaning it, followed by transporting her milk to the freezer I felt powerless.  So did she.

As I look back, I see many things I did right and some things I could do better. I look forward to sharing both with you.