Just as an aside, our Twitter Party today was EPIC! We even trended Number One!  I want to thank each of you who helped make that happen.  It was sweet to show that Dads can really bring people together.

That said… on to what you have all been holding your breath to find out… Today’s Pappy of the Day is Justin Gagnon.

Justin is a Father of one with a bun on the way!  He also loyally serves our country which we should all be so thankful for.

The following commentary is courtesy of his wife, Dana:

Not many women can say they met their soul mate when they were 16, but I am so blessed to be able to. Justin is not only an amazing, loving husband and best friend but he is such an awesome dad to our little boy. We thought we had it all when we set out to be parents, we were young, crazy in love, had stable jobs and owned our home…God had other plans. Parenthood did not come easy for us. We struggled for two and a half years to conceive and through it all Justin was my rock. He never once wavered in his faith, and knew we would be parents. God blessed us with our first son after that long struggle, and Justin has been such an amazing dad. Logan is so full of life and laughter, so much of that comes from him. When we started talking about trying to conceive again I just knew it would be a battle but Justin once again leaned on his faith. We were blessed to conceive very quickly the second time and we are now expecting our second little boy this July. I cannot wait for my sons to see what a Godly man Justin is and to learn from him as they grow. My hope is that they will one day be like their father and have such an unwavering faith. Justin is so smart, has an infectious laugh, and is such a geek. I say that in the most loving way because I’m a geek too. We are blessed to have him as the head of our family and love him so much!

Thank you for being a role model for Dads everywhere, Justin! 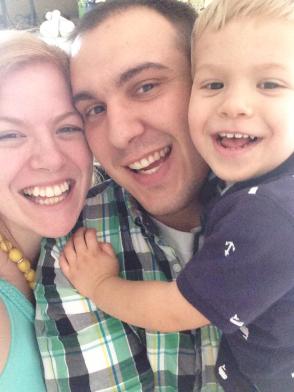